"I Will Get Domesticated After Awhile"

Rhetorics of Gender, Class, and Region at the Female Seminary, est. 1853 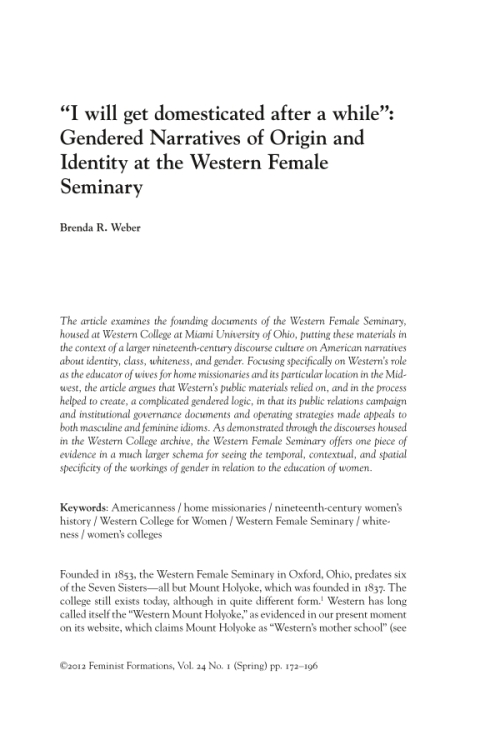 Article: "I Will Get Domesticated After Awhile:"  Rhetorics of Gender, Class, and Region at the Female Seminary, est. 1853

The article examines the founding documents of the Western Female Seminary, housed at Western College at Miami University of Ohio, putting these materials in the context of a larger nineteenth-century discourse culture on American narratives about identity, class, whiteness, and gender. Focusing specifically on Western's role as the educator of wives for home missionaries and its particular location in the Midwest, the article argues that Western's public materials relied on, and in the process helped to create, a complicated gendered logic, in that its public relations campaign and institutional governance documents and operating strategies made appeals to both masculine and feminine idioms. As demonstrated through the discourses housed in the Western College archive, the Western Female Seminary offers one piece of evidence in a much larger schema for seeing the temporal, contextual, and spatial specificity of the workings of gender in relation to the education of women.