Salt in the Sand: Memory, Violence, and the Nation-State in Chile, 1890 to the Present 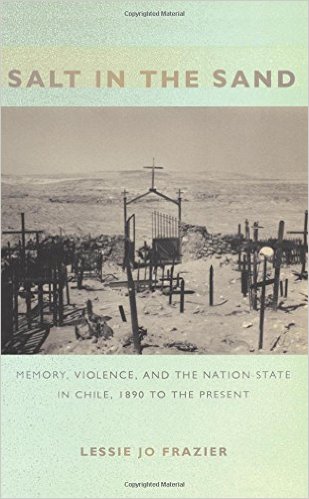 Salt in the Sand is a compelling historical ethnography of the interplay between memory and state violence in the formation of the Chilean nation-state. The historian and anthropologist Lessie Jo Frazier focuses on northern Chile, which figures prominently in the nation’s history as a site of military glory during the period of national conquest, of labor strikes and massacres in the late nineteenth century and early twentieth, and of state detention and violence during World War II and the Cold War. It was also the site of a mass-grave excavation that galvanized the national human rights movement in 1990, during Chile’s transition from dictatorship to democracy. Frazier analyzes the creation of official and alternative memories of specific instances of state violence in northern Chile from 1890 to the present, tracing how the form and content of those memories changed over time. In so doing, she shows how memory works to create political subjectivities mobilized for specific political projects within what she argues is the always-ongoing process of nation-state formation. Frazier’s broad historical perspective on political culture challenges the conventional periodization of modern Chilean history, particularly the idea that the 1973 military coup marked a radical break with the past.

Frazier, Lessie Jo. Salt in the Sand: Memory, Violence, and the Nation-State in Chile, 1890 to the Present. Durham: Duke University Press, 2007. Print.